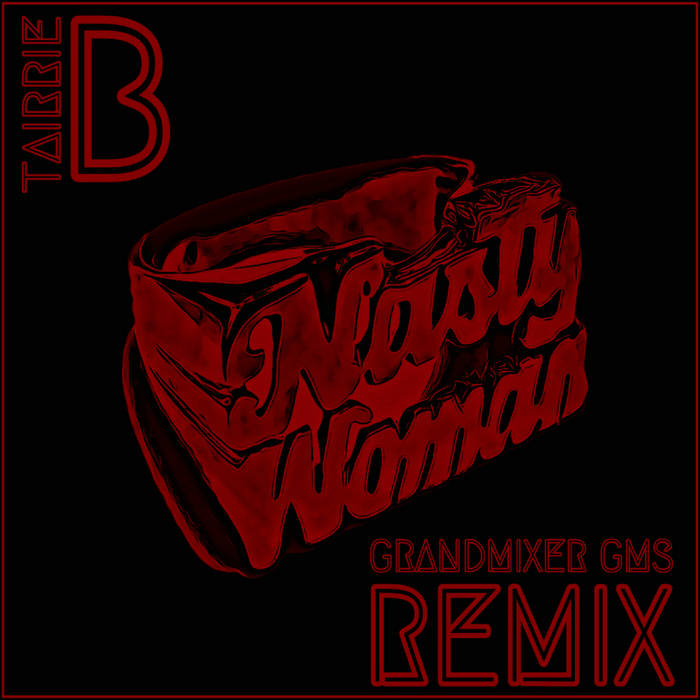 I am proud to present my killer new remix for "Nasty Woman" compliments of Shaun Jones AKA Grandmixer GMS whose rad talents for scratching & transforming you can also check out on "Truth Bomb" & "Caution" from my new album "Feminenergy" released in 2020.

GMS first touched the turntables as a breakdancer at 11 years old. In 1986 he became the first DJ to mix for commercial radio in Spokane, Washington at just 14 years old. As a turntablist, GMS won the 1993 Inland Northwest Battle of the DJ's and began mixing with Tobin Costen on Spokane's then only rap show that same year. The following year GMS began mixing for Nasty-Nes on Seattle's KCMU Rap Attack until retiring from music in the mid 90's. In 2020 he picked up the needles to reunite with Nasty-Nes on KFOX Nightbeat where he can be heard mixing every Sunday evening from 9-11pm @ www.rainieravenueradio.world 💿 🎧 💿 In 2020 GMS also became the first Spokane DJ to mix on "Sway In The Morning" - the world's #1 Hip-Hop radio show and his mixes consistently rank in the top 10 on Mixcloud's global charts, hitting #1 on multiple charts.

DJing is an art and Grandmixer GMS is a true artist. It's been my pleasure to feature his skills (which are second to none) behind the turntables on my new album "Feminenergy" as well as share his talents as a producer on this re-imagined version of "Nasty Woman" which has a cool old school flavor w/a modern twist. I love this new remix and have huge respect for the man who made it.

QUOTE ☞ When I first heard "Nasty Woman" on my phone call with Tairrie B, I absolutely loved it! Of course, I didn't get the full essence of the song until I heard it in person and I was immediately drawn to the drums, the overall West Coast feel, the brilliant use of the sample clips, and the message. My approach when remixing a song is to enhance it -- not take away from it -- and since the original version was very good on its own, I decided to create a drum and sample track to complement the existing beat and feel. I also wanted to mostly follow the "Cameron Paul" remix format to make it "DJ friendly" and thus easier for radio mix shows and club DJ's to mix in and out. And since Tairrie is still a true Hip-Hop artist at her core -- who loves scratching (maybe almost as much as I do) -- that made it easier to incorporate a "scratch break" to pay homage to her original album and sound. Due to her powerful vocals and strong delivery, her voice is perfect for scratching! Overall, working with Tairrie has been a great experience and a true honor, especially since I have been mixing her records from day one back in 1990 until today. I look forward to any and all future projects with her, including one day possibly rocking the stage together whenever live performances are given the greenlight! - Shaun Jones AKA Grandmixer GMS

Nasty Woman
-------------------
Donald Trump: I thought she was the meanest, most horrible, most disrespectful of anybody. She was extraordinarily nasty. She was nasty to a level that was just a horrible thing the way she was and I won’t forget that soon.

I’m a savage, Democratic nasty woman
A badass loud mouthed, sassy woman
Pull up to debate with my facts and charts
Rip you to shreds with my raps and smarts
Leave scars and body parts from the chaos
Summon my sisters and hold a séance
Witch, bitch, Knoxvillain in black
Not here to be nice or smile in fact
I drip intelligence not diamonds
Eloquent screaming or rhyming
Ain’t no chick as cold as this
More feared than loved, I told ya this
I don’t owe ya shit, Holy shit
Inked to the wrist still blasphemous
With common sense, intense with no regrets
As nasty as it gets

What up punk
I’m the legend you forgot to mention
Set it off, set my intentions
Progress, protest and manifest
Never let them see me sweat
Los Angeles, West Coast classic
Nasty, leftist, check the transcript
I flipped that shit from rap to rock
Rock to rap and I will clap back
On sexist, white supremacists all day
Speak my mind, no namaste
Slay misogynist propaganda
Karma’s a gangsta
Fearlessly and forcefully
For equality and diversity
Not a novelty, an anomaly
Most importantly don’t fuck with me

I’m a nasty woman, no apology
Respect to The Squad and AOC
Hold up, are you’re talkin’ to me?
Defund the motherfucking planned patriarchy
Keep abortion safe and legal
Kamala Harris for the people
Arrest the cops who killed Breonna Taylor
That’ll make America greater

I’m a nasty gal and a nasty woman
Davis, Steinem. Donovan
Sisters, mothers, conscious daughters
Reclaim your time like Maxine Waters
Throw that shade like Madame Speaker
Don’t follow… be a leader
Feminism is the radical notion
That women are people
Equal, damn, how evil
Black clothes no wack flows
Blue votes, yeah, we gotta stack those
Feminist, red lipstick rebel
Hard truth, hip hop, scream queen, heavy metal
Receipts, going back to the nineties
Stood my ground, never on my knees
You better check my acronym
I’m “Being In Total Control of Herself” again

Donald Trump: And now you have a sort of a mad woman I call her because she was so angry and such hatred. I mean, I’ve never seen anything like it. She was the angriest of the group and they were all angry. They were all radical left angry people.